Did You Know Articles

Recently, I visited the Museum of Islamic Art in Doha, Qatar.  I was so inspired by the experience of seeing carpets from the “Golden Age” of weaving (16th and 17th Century) on display that I wanted to put together some information about the museum and its collection for the benefit of our customers.

Celebrated architect I.M. Pei came out of retirement to design the Museum of Islamic Art (MIA).  Pei is known for having designed, in collaboration with Wilmotte and Associates, the Louvre Pyramid in Paris (completed 1989).  The 91 year old Mr. Pei prepared for his work on the MIA project, by takinga 6 month research tour of the Islamic world, looking to inspire his designs through firsthand experiences of Islamic architecture, history, and art. 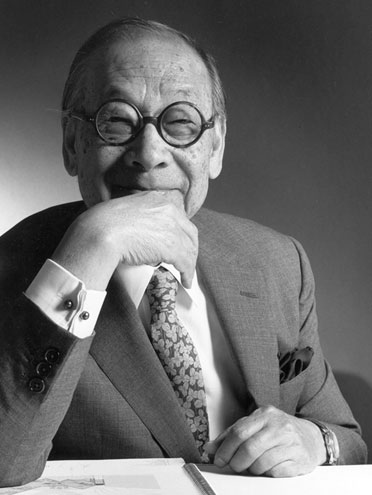 Sitting brightly on a man-made, private island at the south end of Doha Bay, the MIA is a substantial structure built of pale sand-colored stone.  Mr. Pei asked the Emir of Qatar, Sheikh Hamad bin Khalifa al-Thani, who is also the chairman of the museum’s board, for a private island upon which to build the museum after rejecting several other proposed sites.  The architect was concerned that as Doha’s skyline became filled with tall buildings and even taller skyscrapers, the museum’s design would be overshadowed and the aesthetic ruined.  Massive at 45,000 square meters (or roughly 484,000 square feet), the museum’s structure appears as a stack of “cubes” placed together to form octagonal rings, growing smaller and smaller as one tops another.  A stainless steel dome crowns the building, obscured by the short, square stone tower that surrounds it.   This hidden dome, its geometry mirroring the octagonal structure of the building, is “pierced” by a single opening that allows light to stream into the museum’s atrium.  64 landscaped acres are dedicated to the museum and the surrounding park.  December 8th, 2008 was the MIA’s grand opening to the public.

Art and artifacts from Spain, Egypt, Iran, Iraq, Turkey, India, and Central Asia are all housed in the museum:  a collection that has been gathering since the late 1980’s.  Several carpets are included in the museum’s collection, but only a select few are on display at any given time.

When we inquired as to the care that a silk rug in the exhibit receives to maintain its condition (as silk rugs are more highly prone to oxidation over time), we were provided with the following information from the Acting Head of Conservation:  "[Preservation activities] include keeping the light levels low in order to protect both fibres and dyes and monitoring the gallery on a weekly basis for dust and pests that could hurt the object.  At a certain point, this carpet will return to the museum storage, for what we call ‘environmental rest’, and another object will take its place at the gallery."

Two silk rugs at the museum are of note:  The Rothschild Small Silk Medallion Carpet and an Isfahan rug formerly in the collection of tobacco heiress Doris Duke.  The Rothschild Carpet, approximately 5’10”x7’6”, was woven in Kashan, Iran in the mid-16th century.  According to Philip Jodidio, who wrote the official narrative of the museum in his book “Museum of Islamic Art,” the design for this rug likely came from the court studio of the Shah, and it may have been originally “intended for a book binding in tooled leather or a lacquer painting.”  Jodidio also notes that the rug must have been stored practically untouched and in darkness for its incredible condition to have been maintained over the centuries.
As for the Duke Silk Isfahan, while this rug is unattributed in the museum’s information, when comparing a photo of the Duke Silk Isfahan with a photo of the silk rug in the museum’s collection, it is apparent that these are one and the same.  The Duke Silk Isfahan gained worldwide attention in June 2008, when it sold for a record setting $4.45 million.

The Hyderabad Carpet from Indian is attributed to the 17th century.  At approximately 10’8”x52’4”, it is fair to say that this is an enormous runner.  According to author Jodidio, the Hyderabad Carpet was most likely a royal commission, as few others would have had the financial means to sponsor the labor and materials required to make a rug with an area of over 550 square feet. 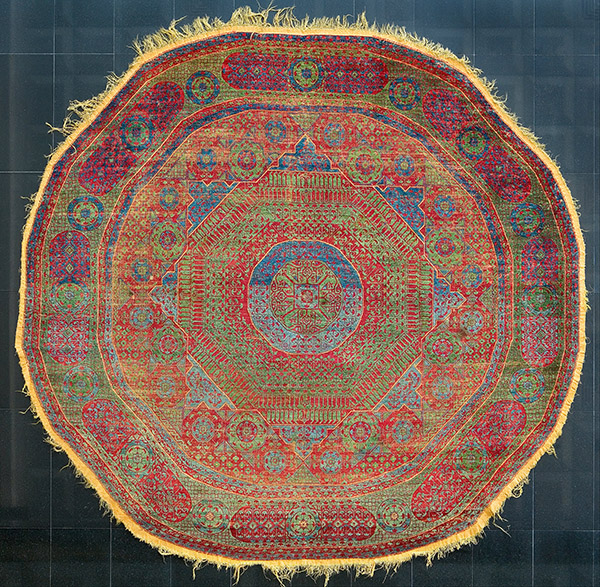 Finally, there is an Egyptian Mamluk rug (circa 1575) sized 8’10”x 9’3” that is simply referred to as the “Round Carpet” in Jodidio’s book.  The classic and distinctive design, evocative of so many other Mumluk rugs, is composed of one octagon inside another filled with small, intricate patterns knotted in vibrant shades of green, red, and blue.  According to Jodidio, a great center of weaving was created in Cairo during the reign of Qaitbay, who was the Mamluk Sultan of Egypt from 1468-1496.  Mamluks were both slaves and warriors, and their power as a military class became so great that they were able to seize rule of Egypt from 1250-1517.  Qaytbay’s reign is thought of as a time of great prosperity and stability, and his architectural legacy remains in Egypt in the form of at least 230 sponsored monuments.  The patterns in Mumluk rugs are a reflection of their art and architecture.  Interestingly, Egypt had no previous tradition in rug making, and the technique and design of Mamluk rugs bears little similarity to those made in other parts of the Islamic world, such as Persia, around the same time.

I hope you have enjoyed learning about the highly impressive Museum of Islamic Art and will consider a visit in the future.

Photos of rugs courtesy of the Google Art Project

Please fill out this form, and we'll send a confirmation to your in-box.  Once sign up is complete, from time-to-time, we'll email you something new or special.

(We promise not to email too often like some companies do.)